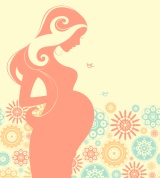 InshaAllah I will try to be more diligent in posting birth stories of Yaqyn Birthers. Today’s story happened in 2010 when I was still under the great Doula Ginny Phang’s tutelage. It was very special to me because Nuha’s mother is a good friend and I am forever grateful to her for letting me be Ginny’s back up.

Her labour took a very long time and her bag of membranes had broken many hours before she finally went to the hospital. Had she been under a gyn/ob who wasn’t supportive of her choices, she would have sooner been cut up (c-section) as there was a point in time at the hospital that her labour didn’t ‘progress’. Read on to find out what happened in the end:

*Reprinted with permission from:

I had two EDDs given by two different gynaes. The first gynae I went to set my EDD as Oct 30. Dr X at TMC brought forward my EDD to Oct 26. My final gynae, Dr Mary Rauff, took Oct 30 as my official EDD.
Nuha was born on Nov 5 at 12.23am. She missed her Daddy’s birthday by 23min. Going by the official EDD (Oct 30), she was a week overdue. Had we stayed on with Dr X, I would have most probably been induced for labour.

So this was how my pushing went: The doctor and nurses would look at the contraction monitoring machine while I sit there in the water. Once my contraction came, they would cheer and shout for me to push as hard as I could. So I pushed and pushed like my eyeballs were going to pop out. Long and hard. They could see the baby’s hair peeking out but then the contraction would go away and the baby would slide back in. By the time the next contraction came 10 minutes later, the baby would be back in its original position as though I never pushed at all.
So this pushing business went on for two hours. I remember this part very clearly because I really had to work very hard. I remember wondering if it was possible for my eyeballs to shoot out from the sheer force of my pushing. Anyway, I was getting tired and Dr Rauff could see that this pushing thing was going nowhere. So she asked me if I’d like some help. What kind of help, I asked. She said that she can hold the baby’s head in place with a vacuum in between contractions so that the baby won’t slide back up. But I’d still have to do all the pushing work myself. I agreed immediately. So for the last time that night, I got out of the jacuzzi tub and obediently climbed back into bed.  I never imagined myself giving birth this way, with both my legs splayed open, surrounded by my husband, my doctor, two doulas and at least three nursing staff. All these women and one man cheering me to push and counting 1, 2, 3, 4….as I pushed and pushed. Thanks to the vacuum which held her in place, the baby crowned after two contractions.
No wonder people call this moment the ‘ring of fire’. I felt like I was being burnt and stung under there and for a split second, I actually wanted to stuff the baby back in. The only thing that kept me back was an even greater desire for this whole ordeal to end asap.
Nuha fully emerged after some pushes and belted out a string of loud hearty cries.

She was put on my chest, which was uncomfortable because my head was positioned lower than my body at that time. I looked up and just stared at her as she cried and looked back at me. I don’t know who was more relieved at that time – me or her – that the birth was over.
I put her to my breasts and she latched on like an expert. It was apparent by then that I have an extremely lazy uterus. My placenta refused to emerge so I was put on pitocin again. But by then I was back to my happy, chirpy self. As Dr Rauff stitched me up, I told her about how my mother took 40 hours to give birth to me and it seems like I’ve come full circle.
Nuha was checked and weighed right there in the delivery room where we could still see her. She weighed a healthy 3.87kg. My parents were shocked when they heard this because they were expecting a smaller baby haha. I wasn’t surprised because I ate a lot of cookies during Hari Raya. All that butter and sugar had to go somewhere.
So was I happy with my birth experience? Definitely. Considering how slowly my labour progressed and how my contractions casually came 10 minutes apart right til the end, I could have easily ended up with an emergency c-section. Labouring in the water brought huge relief and even though I gave birth on land, I had no regrets trying for a water birth.

Will I try for a water birth the next time? Yes I will. When will that be? Not anytime soon, insyaAllah